Director Saqib Malik, was ecstatic about the film as well as visibly exhausted because of the effort he had put in to the film. He said that,

“I would probably never be able to make a film like this again.”

The reason being, it was just too much work. With this new Pakistani film industry being as young as it is, he had to take the place of multiple cogs in the proverbial machine.

For Saqib, “Baaji” is a passion project, the likes of which he may never attempt again. He is however open to other duties like production. What made it all worth it for him, was Meera. He was all praise for his leading lady and said that he chose her for the role because she had been a star of the previous generation so she could lend authenticity to the role. For him, she fit the role like a glove.

In fact, everyone was all praises for Meera. Mr. Rashid Ali, who had worked on wardrobe for the film said that it was a herculean effort and that everyone was floored by Meera’s performance on set.

Next up was Osman Khalid Butt who was bursting at the seams with excitement. He plays an up and coming director, Rohail Khan in the film. His first dialogue in the teaser is, “Main ek Classic Chehra dhoond raha hoon”, so it was only pertinent to ask him what his idea of a classic face was.

“A face that could be molded in to anything. A classic face to him was someone who could portray innocence and yet be smoldering when the camera required it to be”

Osman Khalid Butt gushed about her performance in the film and her incessant, experimental approach to every scene. He said that he had never been challenged this way before and that meeting Meera after learning about her during his time at NAFDEC had been a great experience. It was unfortunate, he said, that the masses only paid attention to the controversial and scandalous side of her and disregarded her craft almost entirely. 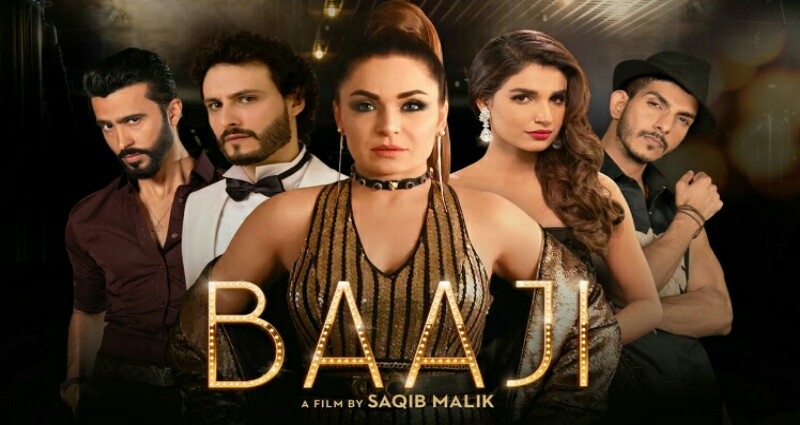 An ageing film star, a new face to take her place, everything on the line; we’ve heard this story before. However, what gives “Baaji” its authenticity is Meera. The official trailer of Baaji has been

He was also very hopeful about the film. His hopes didn’t just rely on its commercial performance however, since he believed that “Baaji” would be a far cry from the staple diet of romantic comedies and patriotic dramas that the Pakistani film industry had been surviving on since “Waar”. If the masses walk out of the theater having experienced something different, Mr. Butt believes the film will have done its job.

Amna Ilyas, who plays the second lead in the film was pleasantly blunt about her expectations from the film, “Meera ji ne kaha hai na 50 Cr karegi?”

She joined Osman Khalid Butt in the hopes that the Pakistani masses would see the film as very different from the norm and that they would leave the theater enthralled.

When asked about how her character ‘Neha’ in “Baaji” is different from that of ‘Rafina’ in “Good Morning Karachi”, her answer was as succinct as before,

“The motivations are very different, but the struggle is the same. While Rafina dreamed of becoming a model and saw herself on billboards like the one across from her balcony, Neha doesn’t want the glitz and glamour, yet their struggles are identical.”

Meera Jee only wanted to talk about her co-stars and director. She called them all great stars and said there was practically no difference between working with them and working with her old friends in the Lollywood of the 90s.

She opined that she had learned a lot from Osman and Amna and that it was great fun playing the character of Shameera (an obvious play on her own name), which was very different from anything she had done before. However, her highest praises were for only Saqib Malik.

All this support and talent, according to her, had accumulated in to a completely new product for Pakistani cinema; one she hopes will redefine cinema in the country and show audiences a new side that they hadn’t seen before.

“Baaji” hits theaters nationwide on the 28th of June.